Yesterday I had a call from one of my closest friends. She lives in New Zealand and we try to talk once a week or so. Despite us having very different lifestyles, it never seems to fail that whatever is happening in my life seems to be a mirror for her and/or vice versa. It’s uncanny but we long ago accepted this is the flow of our lives and try to learn from each other as we go along.

Yesterday we talked about connections. And I expressed some frustration at with my life at the moment. I know I’m where I’m meant to be, but sometimes it’s hard to see what I’m doing. My friend works in the Restorative Justice system in New Zealand and mentioned that she’s been thinking a lot about how one comment someone makes can have ripple effects in the life of the person who hears that comment. And that maybe that one comment was all the exchange that ever needed to happen between those two people for great things to come of it.

My friend reminded me of the ripple effect this blog can have or the effect that my conversations have with people I know all over the world. Most people I know have watched my life with interest as I’ve left the corporate world and decided to take a gap year (or two), surrender, and see what happens. She mentioned that she thought that my actions and my comments have affected people in ways I might never know.

We hung up and I started texting with a friend I recently met over in Western Australia. Within five minutes, she told me that I am an inspiration to her in choosing things ‘intuitively’ and that she’s thought of me each time the word intuitive has come up for her in the past couple of weeks since meeting me.

I had to laugh. Here is a perfect example of what my Kiwi friend was talking about. The Universe delivered it on a plate for me, just as I was getting frustrated, to remind me that I’m on the right path. And it also made me laugh for another reason.

Three years ago this week I was on sick leave from my job. I had been signed off on five weeks of stress leave and been told I was on my way to a heart attack if I didn’t stop work immediately. A number of factors had contributed to this: a heavy workload, my marriage break up and subsequent fall out with almost all of my family members (especially my daughters), a social media stalker, feeling unsupported by pretty much everyone in my life, being a perfectionist myself and a HUGE control freak. But something the doctor said to me that day got through my brain.

I stopped everything. I took a break from everything and everyone and went home and slept for 10 straight days. I only got up to fix dinner for my girls and then went back to bed.

Ten days later I woke up and had ten days in front of me before Christmas. I packed the girls off to their dad, bought a plane ticket for that night and jumped on a plane to New Zealand to see my aforementioned friend. It was the first time I had listened to my intuition in a long time. It told me to go to New Zealand.

I spent a couple of days catching up with my friend but then I heard a voice tell me to go to the South Island. Luckily my friend loves me so much and gets me so much that she drove me to the ferry terminal at 2am so I could catch the 2.30am ferry to Picton. She didn’t even bat an eyelid when I told her I was going.

The next morning at 5.30am as the ferry glided into Picton Sound, I was the only passenger on the outside deck watching the sunrise. The Sound was like glass. I felt like I was coming home. I had entered that Sound by ferry a few other times in my life, but this time felt special and I knew that I was going to be OK. From that moment on, I only listened to my intuition. 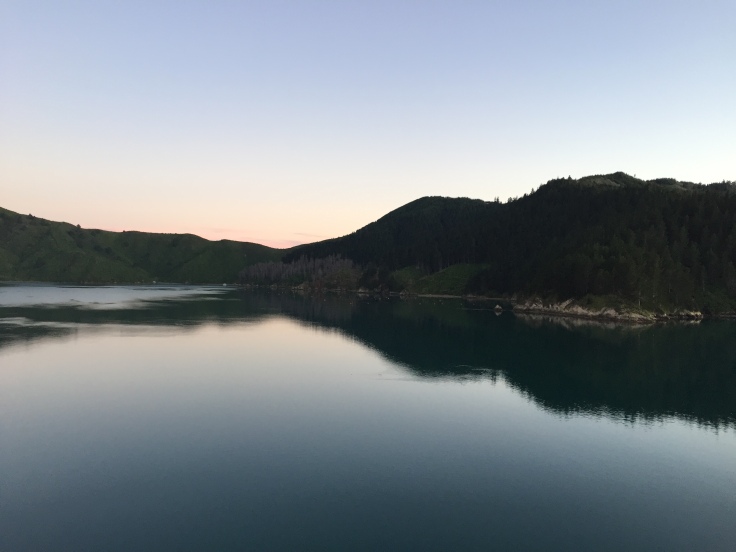 It was too early for the rental car places to be open but I had organised just before closing the night before for a guy to leave a car for me in the public car park. He said he’d leave the keys under the number plate. I shook the number plate and voila! – out popped the keys to my chariot. I had talked to a few people for suggestions of where to go and every one of them had told me to go to Nelson and then down the West Coast road. When I got to the T junction – right for Nelson, left for Kaikoura – my intuition said left. So I went left.

My intuition guided me to the most amazing spots. I picked up hitchhikers along the way (I could hear my mother’s voice telling me not to, but my intuition told me it would be ok) and each one of them was someone I needed to meet and a conversation I needed to have. I found myself winding through the mountains on small lanes and came across a gravesite high on a hill. I found a ghost, or a ghost found me, and I had another lesson on that hillside.

One rainy cold evening I ended up at Hanmer Springs at a fantastic hostel. I went down to the Springs on my own and sat in the hot pools talking in the rain to various travellers. As I got out, the clouds parted, the sun was setting over the mountains and I could see the rain had landed as snow up in the mountains. Yes, just days before Christmas in the middle of summer. There were so many amazing occurrences on that trip, amazing people I met, things that happened to me that I knew I needed to change the way I was living my life.

I came home from that trip having made friends with my intuition at long last. I remembered how much I had relied on it when I was younger and how it hadn’t steered me wrong. My life got so messed up when I stopped listening to it.

I also came home and quit my job. I had no idea of what I’d do or how I’d manage, but it was a leap of faith I knew had to be taken.

And that’s what’s happened time and time again over the past three years. When I get quiet, when I check in with my intuition, it always knows what to do. It’s revealed to me. Sometimes it takes a while (like right now!), and sometimes it’s instantaneous. It often requires a huge leap of faith that I’m going to be ok.

If I’d thought rationally about it, I would have been frozen with fear. I never would have believed that I could create the beautiful life I have in three short but action packed years. I would have worried about money or about being on my own and ending up lonely. I’ve learned that I need a lot less money than I thought to live a full and happy life. And I’ve learned that I was a lot more lonely in a bad marriage than I have ever been on my own. I set an intention that my life would be filled with love and laughter and it is.

My intuition has led me in the past three years to set up two new businesses and then to put them aside, to take a six month life coaching course, to travel to the US three times last year as well as to New Zealand, to travel to Jordan on my own in May, to the Byron Bay writers festival in August, to Peru with my daughter in September and to hike the Cape the Cape in Western Australia in November. That’s a crazy path to have taken to meet my new friend who thinks of the word intuition and thinks of me synonymously.

But I love it. And I wonder, how will the connection I made with her or with others on that trip play out in my future?

What other ripple effects can I create?

My intuition tells me it’s quite a few…

2 thoughts on “The Ripple Effect”