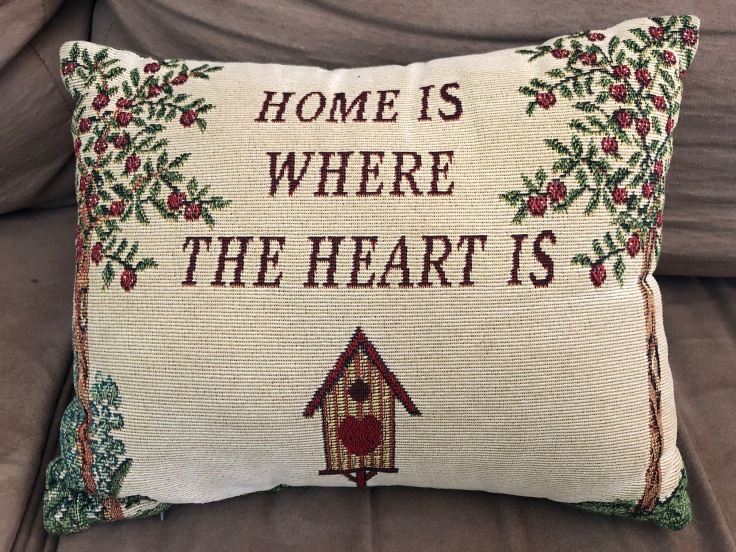 It’s a question I’m asked frequently and each time it kind of throws me.

Most recently it was asked of me in Western Australia by people I met as I traveled around the south western corner of the country. It throws me because for the past 14 years I’ve lived in Canberra. But if I say I’m from Canberra, people look at me strange and tell me I don’t sound like I’m from Canberra. Which is right. I don’t. Most often people guess I’m from Vancouver, Canada, but I’ve never even been there and have only ever spent a few days in Canada at all. I grew up in Michigan in the US but haven’t lived there for thirty years.

So where is home for me?

I have a pillow on my sofa that says ‘Home Is Where the Heart Is’. Hmm…if that’s true then I have many homes. I’ve traveled all over the world and left pieces of my heart in each place. I can’t think of a place I’ve traveled where I didn’t find something to love about it.

I hiked the Cape to Cape trek while I was in Western Australia. On Day 5 of the hike I found myself hiking alongside our guide for the day, Heather. Heather speaks some Noongar, the local Aboriginal language of the area and has a real connection to her land and her community. The more she told me her story, the more I was in awe of her and her connection to her boodja (country), her moort (family) and her kaartdijin (knowledge). She asked me about my connections and I felt a bit lost as I tried to answer her. I told her that I felt very connected to my own knowledge and to my wider family. I explained that I have spent much of the last 30 years wandering the world and have people I love on every continent except for Antarctica. But much of my wandering had made me question my own relationship to country, to land, to a PLACE I feel is home.

Heather looked at me and smiled. She felt I was more connected than what I realised or that I was letting on and was sure that it would come to me. We drifted apart on the trail, each of us lost in our own thoughts. I put my headphones in so no one would bother me (code on the trail for ‘I need some alone time’) and thought about our discussion.

I spent a lot of time over the next 40kms or so (two days of hiking) thinking about home and where I feel the most at home.

It’s not the small town in Michigan where I grew up. I never felt at home there when I lived there and still don’t when I return now to visit. Although my parents still live there and I have a few close friends from there with whom I keep in touch.

It’s not the town where I went to college although again, I have close friends from that stage of my life.

It’s not Vienna, Austria where I spent some time during my university years.

It’s not Washington, DC where I spent four fun years in my 20s and where I met many of my core friends I still have today.

It’s not Sydney although that’s where I met more friends who are very important to me and still in my life, including my ex-husband.

It’s not England where I lived for almost 10 years although a piece of my heart will always reside there since that’s where both of my children were born and I have still more friends.

It’s not really even Canberra, although I have lived here longer than anywhere else in my life. I love it because of the people I know and because my children are here right now, but eventually I will move from here too.

As I hiked along I started to feel depressed. I was actually about as far away on the planet as I could be from where I grew up. Heather talked about her connection to the land as the place she grew up and learned important life lessons.

I mulled this over and then rounded a bend on day 6. My breath was taken away by the vista laid out below me. The rocks, the landscape, the scrubby bush with tall trees in the distance behind me. It reminded me of being near Lake Superior in the Upper Peninsula of Michigan.

And my breath was taken away for a second time as it hit me. Lake Superior is my place.

It is the place of the Ojibwe or Chippewa tribe, Longfellow’s Hiawatha and, the more I thought about it, my family.

My grandparents met on its’ shores in a lumber camp. My dad was born close to the lake near the town of Marquette. My own parents honeymooned on its’ shores and some of my earliest memories include motorcycle trips with my parents to stay at Grand Marais. I grew up camping and learning to canoe and fish from my dad in that same area during various summer holidays. My parents instilled a love of wild places in me from an early age.

The week before I moved to Australia in 1993 I decided I needed to see the lake before I left. I camped on its’ shore at Pictured Rocks National Lakeshore and woke up in the morning to find bear prints on the beach below my tent.

Lake Superior was the first place in Michigan I took my not-yet-husband when we were still dating and he visited me from England. We camped for two weeks, hiking and even made it out to Isle Royale National Park (the smallest national park in the US) in the middle of the lake where we had an amazing canoe adventure seeing moose, otters and other wildlife and hearing wolves at night.

The next year he gave me my engagement ring at 12 Mile Beach. One year we braved the 6 feet of snow and ice on a snowmobile holiday at Christmastime. I actually walked on Lake Superior as it was frozen a couple of metres thick near the shore.

A number of years later, we brought our eldest daughter there from England for her first camping expedition at 4 months old. Three years later, we were camping there with both his parents (who lived in England) and mine when I found out I was pregnant with my second child. Our eldest daughter was able to break the news to both sets of grandparents at once. It was a magical moment.

There have been other family moments too over the years, all of which I realised featured this amazing lake and its’ coastline.

On my first trip to the US just a few months after leaving my marriage I found myself in Minnesota with a couple of days spare. Not enough time to see my parents but enough time to hire a rental car and drive to Minnesota’s side of the lake and hike for two days on the Superior Hiking Trail. Being there soothed my soul.

At the time I thought about quitting my job and hiking around the lake but I wasn’t ready. I had other responsibilities to see through and my life to get in order. Although it was tempting to throw it all in at that moment. I took a photo on that trip that hangs in my bedroom in Canberra. As I stood on the shore of the Indian Ocean thousands of miles from Lake Superior, it hit me that reminders of my lake, my place, hang in various photos and artwork around my home in Canberra.

It’s my place. It’s the place I feel most connected with on this planet. But it took a hike in the opposite corner of the world to remind me of this fact. (Sometimes I just have to laugh at how the Universe works in my life.)

As Heather and I started out on the track on our final day of hiking I was able to bring her up to date with my realisations. She laughed out loud at me. “I can’t believe you thought you weren’t connected to a place,” she exclaimed. “That’s so much connection!”

I told her that hiking the Cape to Cape had inspired me to return to Lake Superior next North American summer and hike the trail around the lake. As the world’s largest freshwater body (by surface area), it has a shoreline of 4387 kms or 2726 miles. There isn’t one consistent trail running around the lake so I’ll have to hike what I can and see other bits by car. The lake is bordered by three states in the US and one province of Canada (so I may end up spending a few more days in Canada than I have so far in my life.)

Next year will mark my 50th birthday. I can’t think of a better way to celebrate it than to return to the place I love and hike a coastline I love for a couple of months. I’m hoping various friends and family members will join me for a day or two (or more) at a time during my adventure to help me celebrate my birthday.

I’ll have to pick my timing carefully; I’m not a fan of snow and ice (part of why I live in Australia) so next July and August should be good. That means I’ll get the best of the weather in the US and miss the winter in Canberra.

And then I can come home to Australia for my favourite time of year here. For my heart lives in two countries. As I wandered the south west corner of Australia I’ve found another spiritual home. One that reminds me of the other. A place I want to live and love and paint and write and walk. But that’s another path and another story for another day. I have other things I need to do right now which require staying in Canberra. So it will wait. If and when the time is right, and the road leads there, I will follow.

But in the meantime, my soul is content. I will keep traveling the world but I can stop searching. I can stop wandering. I can stop chasing something I can’t see, only feel. I can just be. I found my place, my home. It does happen to be where my heart is.