My two teenage daughters and I recently spent a month in the United States having a huge adventure. One week was spent in Grand Marais, Michigan with my parents and brother. One week, hiking and going on wild moose chases on Isle Royale National Park, a wilderness area in Lake Superior. One week in Seattle and the national parks and wild areas in the nearby area. And then one week to drive from Seattle to San Francisco, taking in yet more national parks along the way. My daughters are 18 and 15. I felt like this might be my last opportunity to have a trip like this with them and I wanted to show them there was more to the US than what we hear about in the news. (I grew up in the United States but have now lived more of my life outside the US than I have within it’s borders. My daughters have lived most of their lives in Australia.)

I have to admit, I was nervous about the trip for a number of reasons before we left. Mainly my nervousness came from a fear of being in such a toxic environment. In the weeks leading up to our trip, another mass shooting in the US was reported in the media almost daily. And I always dread going through US immigration and Customs, not because I have something to hide, but the whole process is so hit or miss. One time it can be easy, the next it can take three hours. Even for the three of us traveling on US passports.

This time was one of the bad entries. Two hours in the queue in San Francisco. There were only three immigration officers working at the time and thousands of passengers arriving. When we finally reached the front of the queue my eldest daughter and I looked nervously at each other as we walked toward the unsmiling officer. We both received the same vibe. This wasn’t going to be pleasant. But we smiled and started chatting with the officer. She warmed to us immediately and we got through quickly and efficiently. She was perfectly lovely, just overworked and thorough. Doing her job. And not going to rush just because the powers that be had cut the numbers of officers who should have been there working that day.

After she waved us through and wished us a pleasant trip, my eldest daughter revealed that she had received the same vibe as me. My youngest looked at both of us and said, ‘She was just doing her job. I feel sorry for her that she has so many people to get through.’ I laughed and thought my youngest daughter is right. It’s all in how you look at it.

We made our way to northern Michigan where we were to meet up with my parents and brother. We flew into Houghton, Michigan. This is an airport with one gate, one rental car company and maybe two ground staff to unload bags. As the bags were being unloaded and hand delivered on a trolley to waiting passengers, I stood in the queue to get my rental car. Two men were ahead of me in the queue. The first had ordered three child seats for his rental car. He was angry because there were no child seats available. The college kid behind the counter explained they only had a few and they were all in cars that were already out. There was nothing he could do. The second guy in the queue had brought three child car seats with him. They were being unloaded from the plane as we stood there and watched. He offered one of his seats to the first guy after deciding that one of his kids could get by without it. The first guy was so gobsmacked and highly appreciative. I was reminded as I watched the exchange, which had started out quite heated and then rapidly de-escalated, that most people are inherently kind. They just want peace, harmony and joy for themselves and their family. And when you look at things a little differently, a solution often turns up.

Before leaving Australia I had ordered a set of plastic eyeballs that fit on the ends of your fingers. Ten eyeballs, one for each of your fingers or thumb. Or five sets of two for five people to wear them. The eyeballs were a huge hit from the minute I pulled them out of the packet. My family are always up for some goofiness and the eyeballs were a simple but fun way for each of us to look at things differently.

The eyeballs quickly became a ‘thing’. We each had a set that were in our pockets for the whole trip. Each place we visited, the girls would pull out their eyeballs and we would take funny photos. 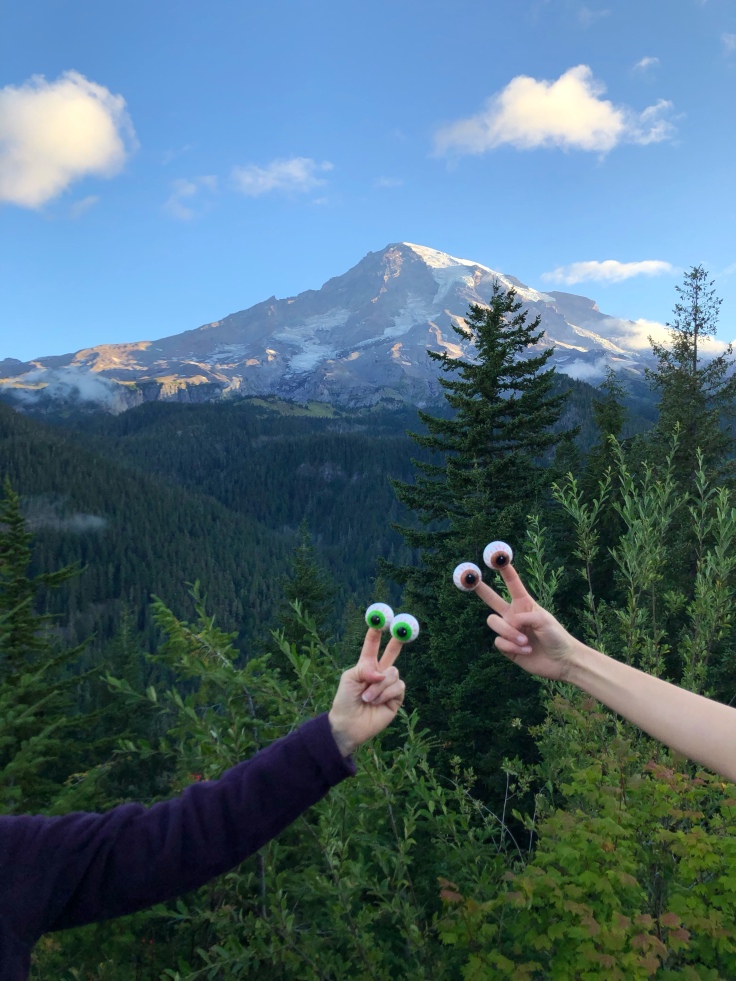 But the eyeballs weren’t just a joke. They enabled us to ‘see’ our trip with new eyes.

Through the eyeballs, we were able to ‘see’ each of our family members differently. Watching my dad try to put the eyeballs on his fingers and interact with his two granddaughters, each who had a set themselves, was hilarious. Most people put them on their index finger and their middle finger. Not my dad. He had his own unique way of getting them to work. As I watched, I realised I was seeing my dad be who he is. No defenses. No barriers. Just him, doing his own thing, to the beat of his own drummer. The way he does in his own unique, quirky way.

We also saw places we had visited many times with new eyes. We saw new places and sometimes had to pull the car over just to take an ‘eyeball’ photos because we knew it would be funny.

My girls saw some beautiful places in the United States that they hadn’t known existed and have a new appreciation for the natural beauty and the national parks we visited. 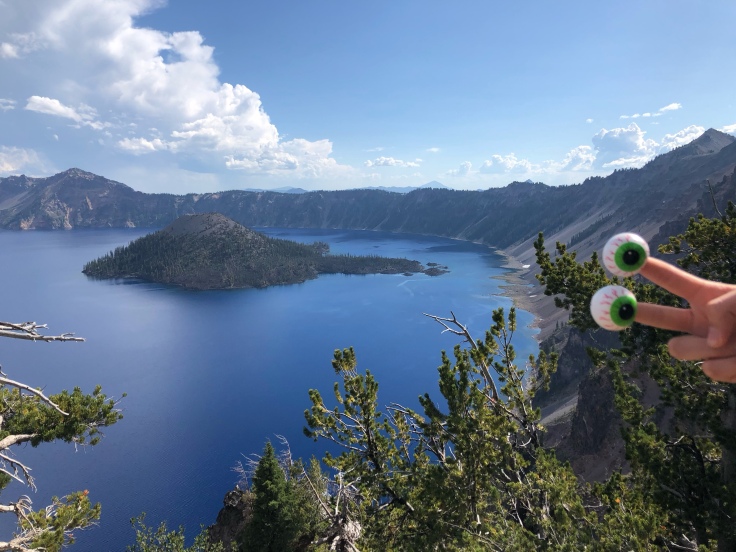 As I wandered through the wilderness of Isle Royale, I saw trees, berries, mosses and other plants I remembered from my childhood. My knowledge of what was poisonous and what wasn’t in the North American landscape came rushing back in an instant. I hadn’t even realised I had forgotten it until I saw a delicious, ripe thimbleberry poking out from under a leaf. 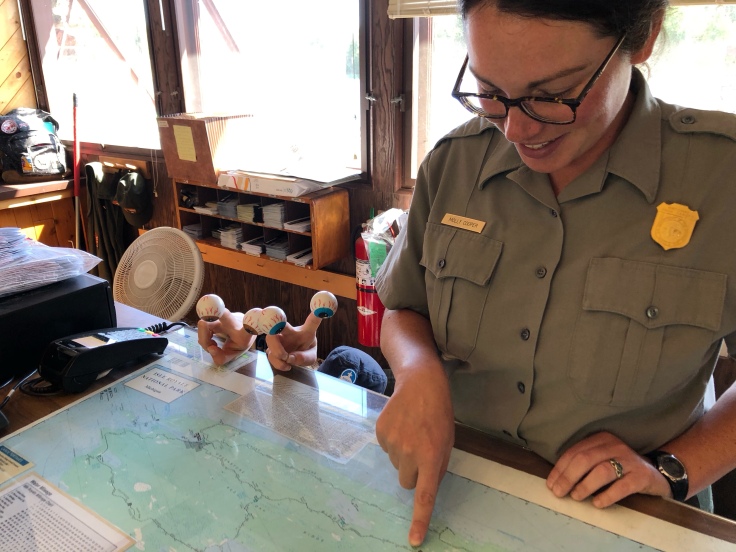 The eyeballs were great conversation starters. They made people laugh and we were able to use them to introduce ourselves to people who may not have talked to us without them. As we entered conversations with people, we came to see that most people in the United States are concerned about where the country is headed.

A few years ago I read, Coming Apart: The State of White America 1960-2010 by Charles Murray and was struck by evidence that the United States could be heading towards another civil war. It’s an opinion I’ve talked about with few others in the US until this trip, when those exact words ‘civil war’ were mentioned to me by a number of people, in a number of places, all unrelated. These weren’t rabble rousers. These are just normal, everyday US citizens who are finally waking up to what is going on around them and seeing the country coming apart at the seams. They are looking at things differently now that Trump is in the White House.

After four weeks of traveling around the US, showing my girls some beautiful places and helping foster a sense in them of the good things the United States offers, I left viewing my home nation slightly differently. I do feel there are strong divisions and the country is being torn apart in a way that makes me sad. But people who for years were able to sit on the fence politically are now being forced to look at what they stand for and believe in. Personally, I think that’s a good thing.

John Pavolitz, US writer, pastor and activist, recently wrote a piece entitled, ‘I’m not the radical left, I’m the humane middle’ where he states: “I’m pretty sure that most people reside here in this place alongside me: the desire for compassion and diversity and equality and justice; that these things aren’t fringe ideologies or extremist positions—but simply the best way to be human.” You can read all of John’s post here:

I reside in that place alongside John. I’ve come to that point by examining myself, my beliefs, what I was taught as a kid, what wisdom I’ve gained along the way; looking at my soul and digging deep. Trying to be the best human I can be each day.

We don’t need a funny set of eyeballs to look at what we believe and why, we just need the courage to look differently at ourselves, to examine what behooves us and what doesn’t and to look around and determine what kind of world we want to live in.

Looking at things differently can make all the difference.