Machu Picchu. It is incredible.

An incredible place of natural beauty.

An incredible place for astronomical study and agricultural research.

An incredible place that remained hidden from the world for so long.

We had an incredible day.

Up early (again!) and we were in the queue for a bus to take us up to Machu Picchu by 6am. The queue is long and despite the fact that there are many buses and each bus is filled as rapidly as possible, it takes half an hour to get onto the bus and then another 25 minutes for the bus to reach the top of the mountain. 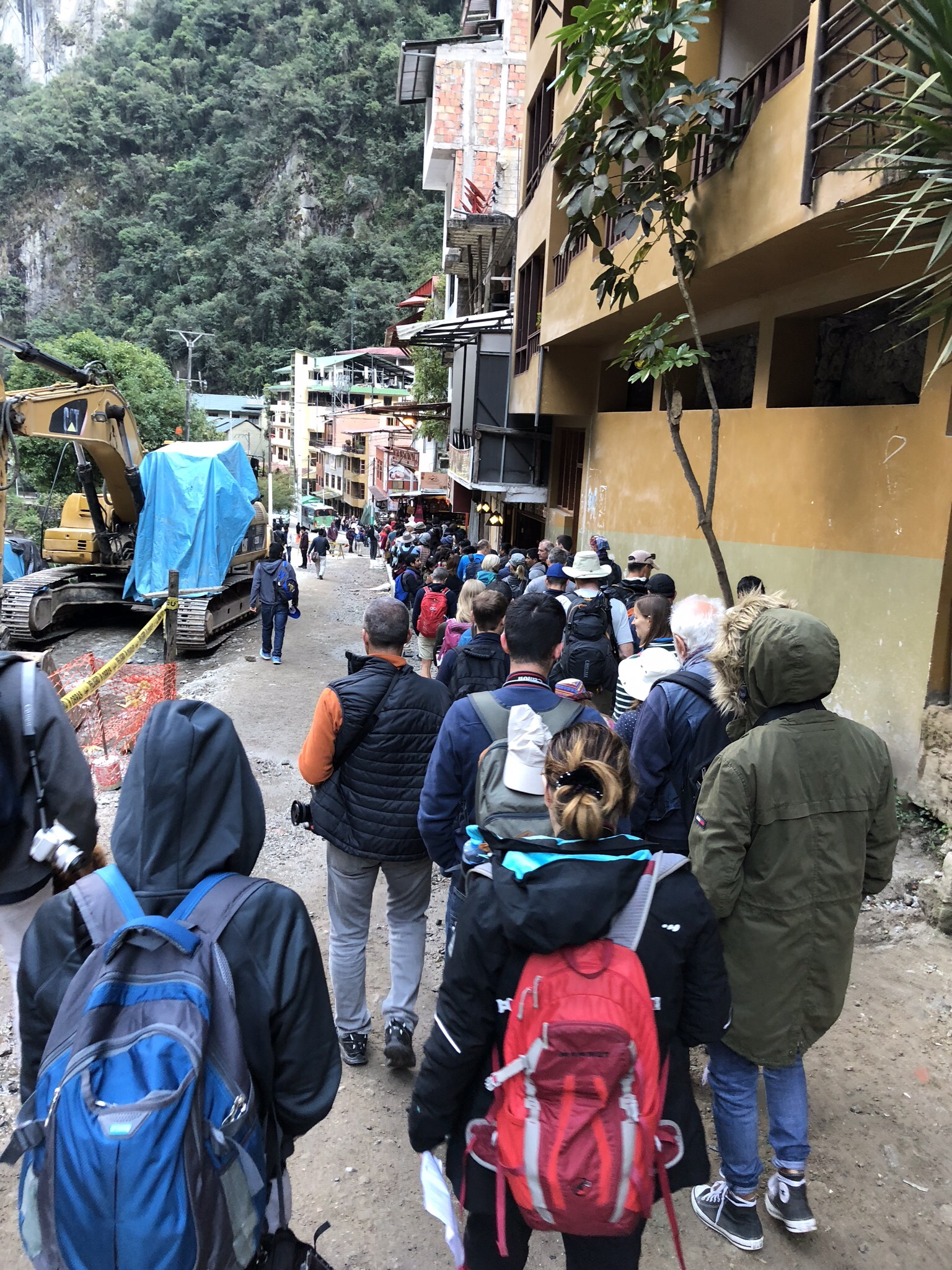 The drive up is precarious and muddy and one lane with passing areas for the buses. The buses spend their whole day going back and forth, up and down the mountain. I wouldn’t want their job for anything. Even with the beautiful scenery. (The first shot below is from the bus looking down and the second is of the road from the top of the mountain looking down.)

We arrived at the top and found another huge queue — this time for the ladies loo! With no other toilet facilities for the entire site and no way to re-enter the site once you leave, everyone makes sure to avail themselves of the facilities before heading in through the entrance gate.

Outside the gate, we talked with a few guides (they all hang out there offering their services) and tried to get a feel for their level of English and for their knowledge of the site. We found one, a woman who seemed knowledgeable, spoke English fairly well and was lovely.

Our guide, Lourdes, had been guiding at Machu Picchu for 12 years. She lives in Cusco with her family and spends a week at Machu Picchu and then goes back to Cusco for a week. She has a young daughter and son living in Cusco.

She took us in through the entrance gate and started giving us some basic information about the site. Almost the first place you come to is the classic shot of Machu Picchu everyone knows. And in person, it doesn’t disappoint. It is breathtakingly beautiful and when you see how the mountain drops away all around, you quickly gain a new appreciation for the Incan designers, engineers, stone masons and builders. 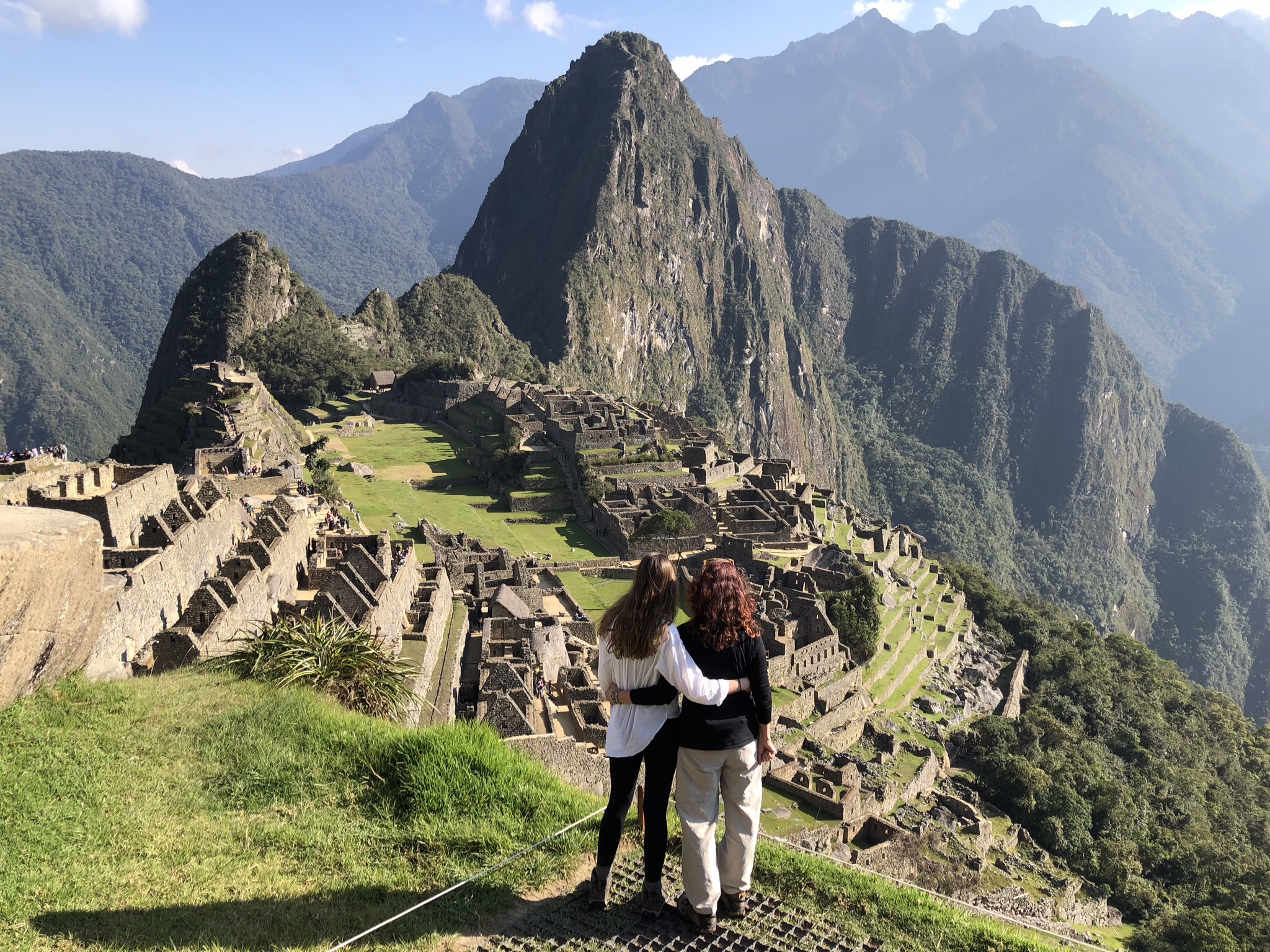 Lourdes explained that no one knows definitively what Machu Picchu was built for but it seems it was a most important religious, spiritual and social centre. The great thought leaders of the land in agriculture set up the terraces into 16 different microclimates. The shamans researched the use of botanical herbs and other plants for medicinal use. The astronomers and astrologers consulted water mirrors and made predictions for the Inca kings (including seeing the Spaniards coming and destroying the Incan civilisation). The engineers built the buildings to withstand earthquakes and the rainy season. And of course, there were royal areas for the kings and a monastery for the most beautiful and clever young women of the Incan empire.

We walked around the quarry where the rock (much of it granite) was worked into blocks for building. Lourdes explained how they would split the rock by drilling holes into it and then place wood into the holes. The wood was then wet and as it expanded, it would come apart. 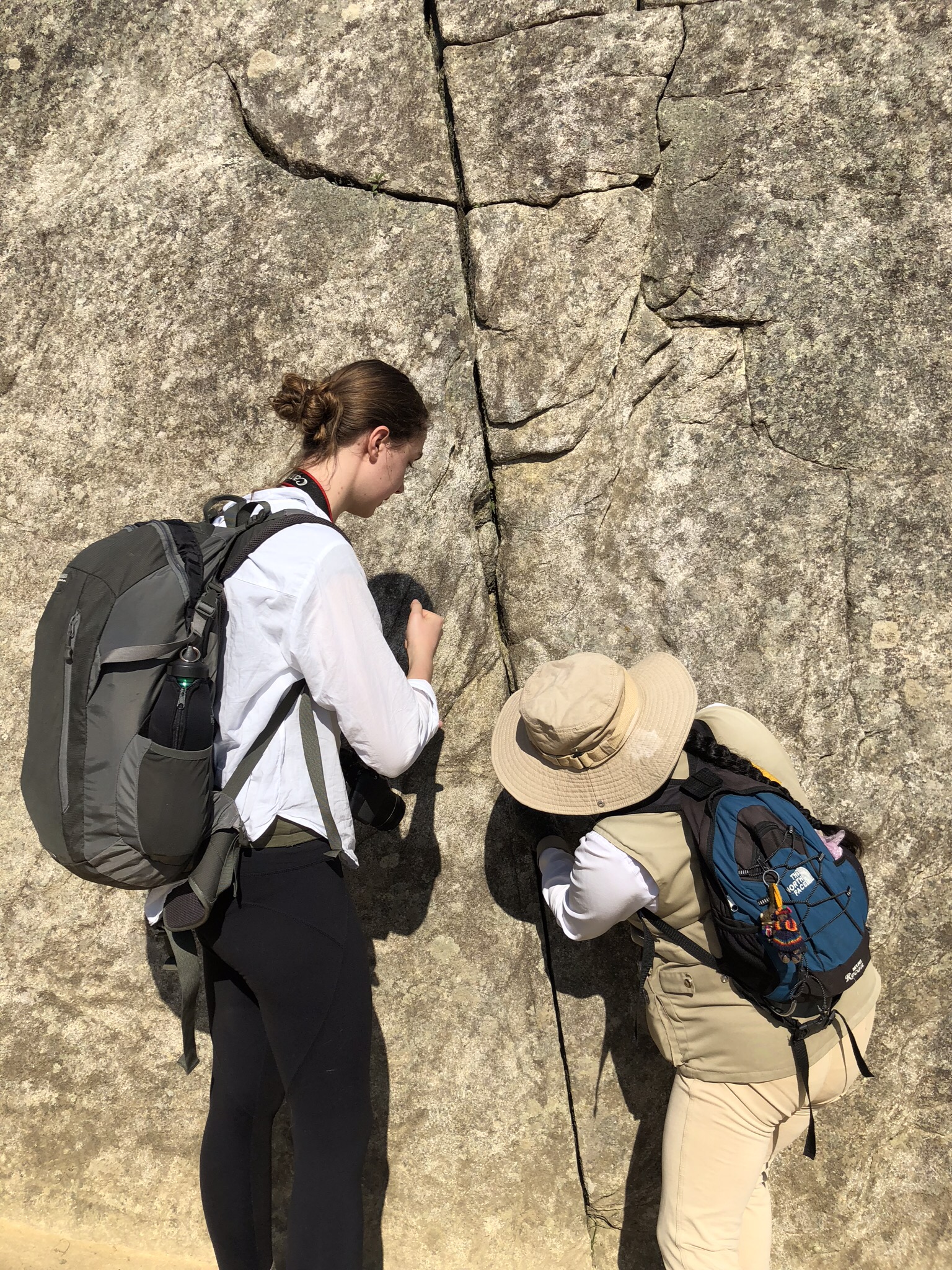 The walls of each building are built angling in slightly. All windows were trapezoid shapes to provide strength. Where mortar was used, it was made from mud, llama hair and cactus to make it strong and waterproof. The roofs were covered with a bamboo frame and then straw thatch that was replaced regularly. This way if there was an earthquake and the roof caved in, it didn’t cause much damage. Lourdes told us that there is an earthquake at Machu Picchu every 40 years.

She showed us a number of rocks with high quartz content and explained all of Machu Picchu is 30% quartz. When Hiram Bingham, the Yale University professor who is credited with ‘discovering’ Machu Picchu in 1911, stayed overnight in the city he wrote how it sparkled in the moonlight. It must be an impressive sight. Sleeping in a glittering city high on top of a mountain. Sadly, no one is allowed to stay overnight anymore.

From the quarry we went through the main door. It’s odd to think that all traffic in and out of the city would have gone through this door. This is the most vulnerable point of the walled city and was built in the traditional trapezoidal shape with a lintel of several tonnes that would have been difficult to put into place. The city was secured from the inside by a wooden door which was lifted and dropped via a complex pulley system. 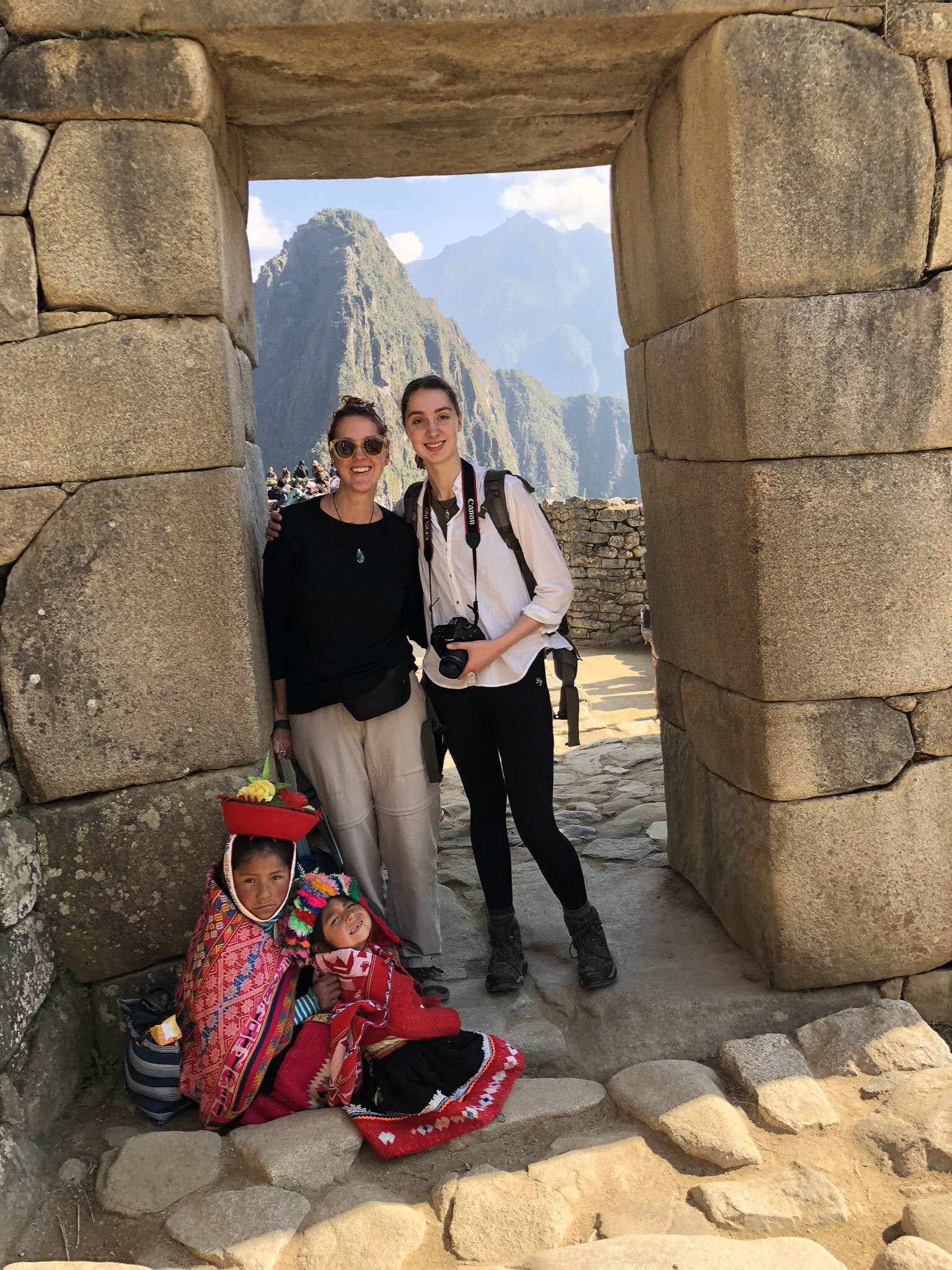 The sun god, the moon god and the earth god were all important deities to the Incans. The Sun Temple (below) sits near the Royal area of the site. It was built so that the window to the East aligns with the sun on 21 June (winter solstice) and then on 21 December (summer solstice) light from the sun comes in through both the East Window and the south window and intersect in the middle of the temple.

The main temple was the place where mummies as well as other offerings (like Hummingbirds, coca leaves and other plants) were placed for worship of the sun god. The temple has three walls with a long altar along one wall. According to researchers, this building never had a roof because the Sun God needed to receive sacrifices at dawn. 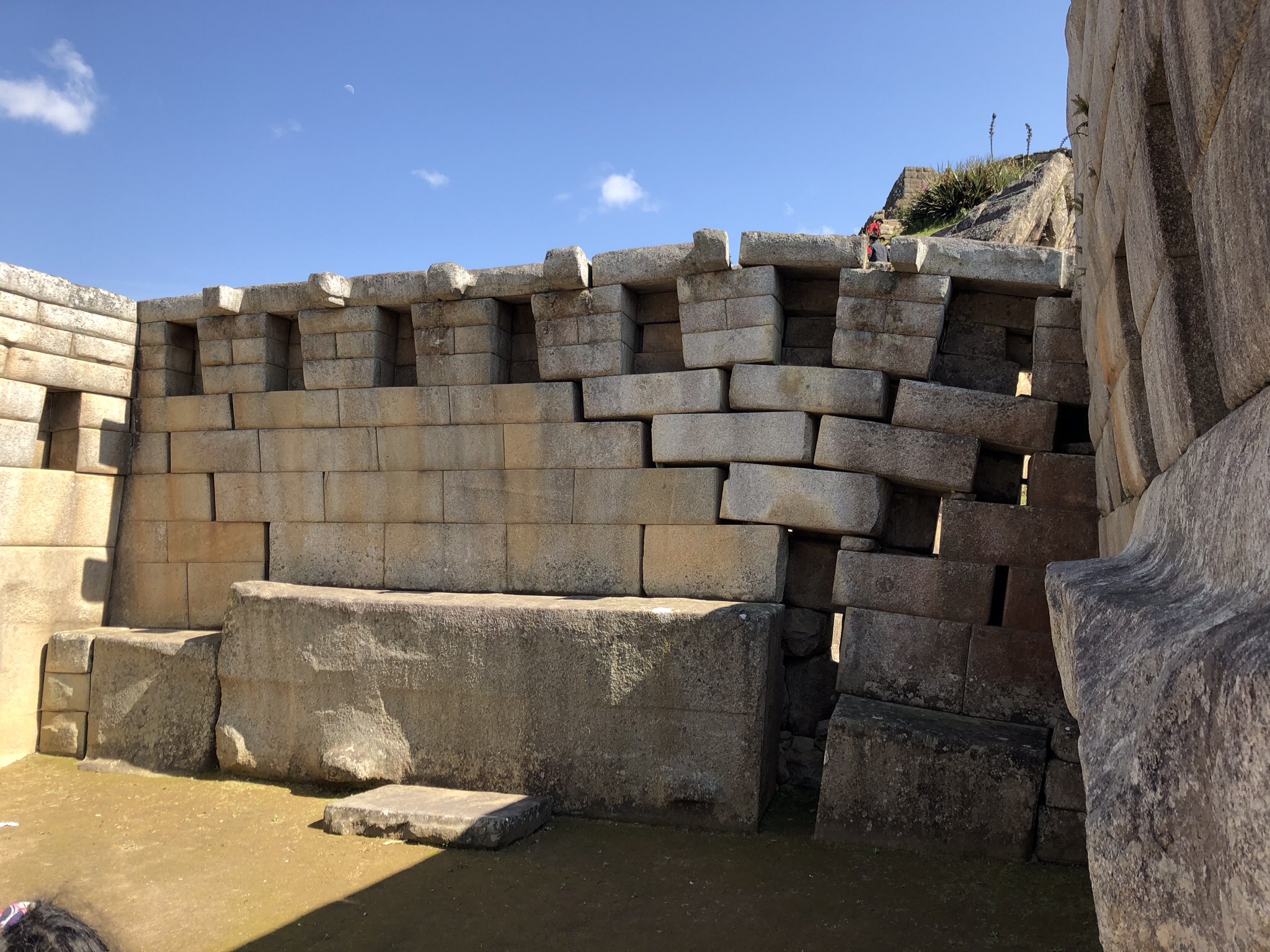 Near the back corner of the temple is a rhomboid stone that aligns perfectly with the Southern Cross in the sky. 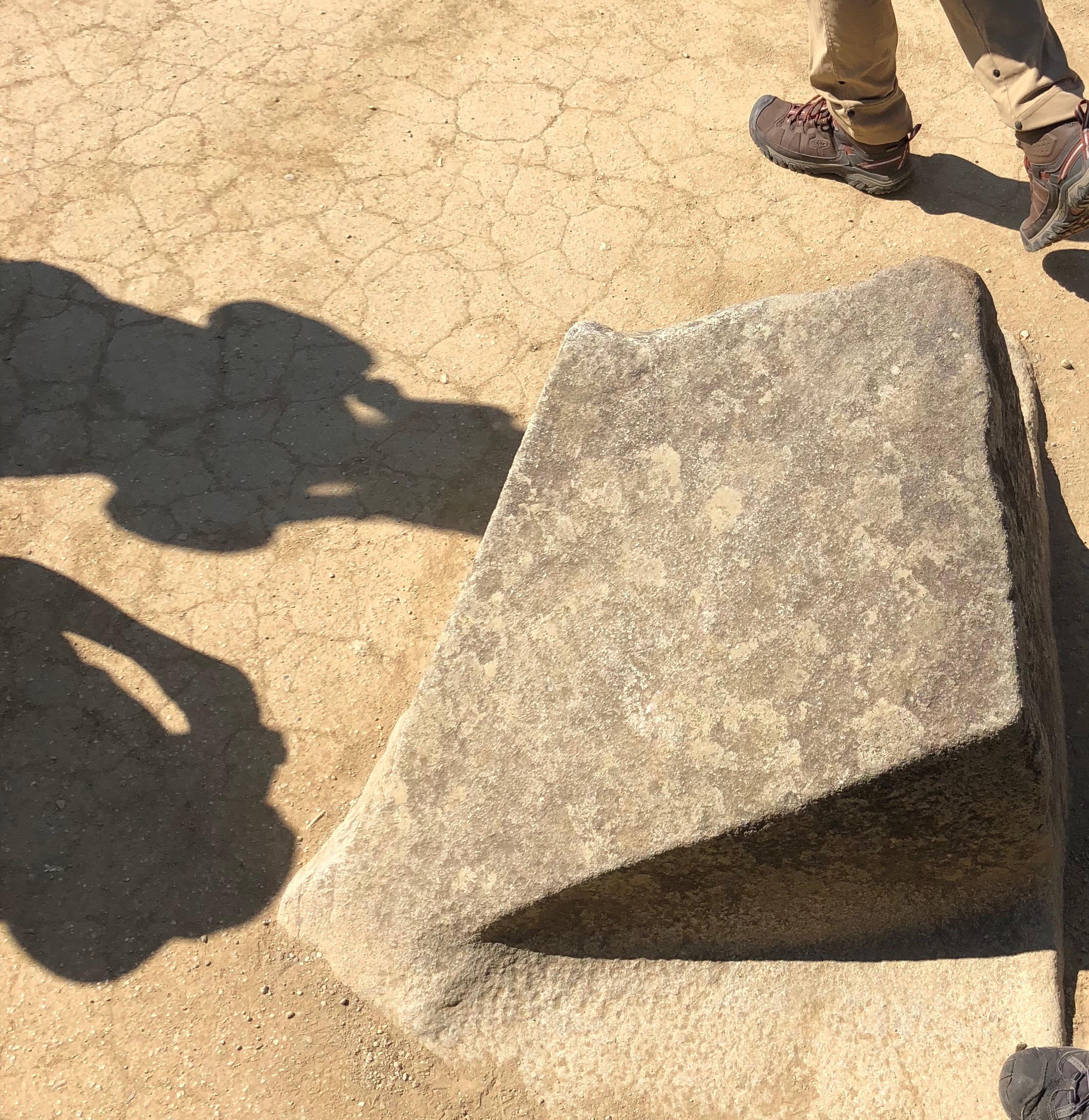 Also nearby is a mummification stone, set on an angle and has an area for blood and bodily fluids to collect.

We also saw the Temple of the Three Windows (below). The Incas believed in the importance of the upper or spiritual world with the middle (or what we would call normal life) world and the under world. Spirit animals represented each world for the Incas: condor for upper world, puma for middle world and snake for under world. From above, the entire site of Machu Picchu is laid out in the pattern of a condor, suggesting that it was a place for much spiritual connection. (Cusco was the political capital of the empire and is laid out like a puma. The lost city of gold that honours the underworld and is shaped like a snake has never been found.)

We climbed 78 narrow stone steps to Intihuatana, the sun dial (below), which sits atop a round hill at the highest area of Machu Picchu. Carved in rock in situ, it served as an astronomical clock aligned with the sun’s position at winter solstice. The Inca believed the stone held the sun in its’ place on its’ path in the sky. Lourdes told us that they stopped letting people touch it a few years ago as it is highly charged and some people set fire to paper with their hands after rubbing it. It does give off an incredible energy. But it is roped off and a guard makes sure no one touches it.

In fact, access to the entire site is tightly controlled. Tickets are for half a day, either 6am to noon or noon to 5.30pm. There are three, one-way circuits visitors can choose from. You can only choose one circuit per visit. If you want to do another circuit, you buy another ticket. Supposedly there are only 2500 tickets available each day, but the reality is that there are 2500 tickets for each session. That’s a lot of tourists coming to this tiny spot. Access in to the site is either through hiking the Inca Trail (shown in the picture below) or by bus from Aguas Calientes, the small town at the bottom of the mountain that is bursting at the seams with tourists. In 2016, 1.4 million people visited the site. 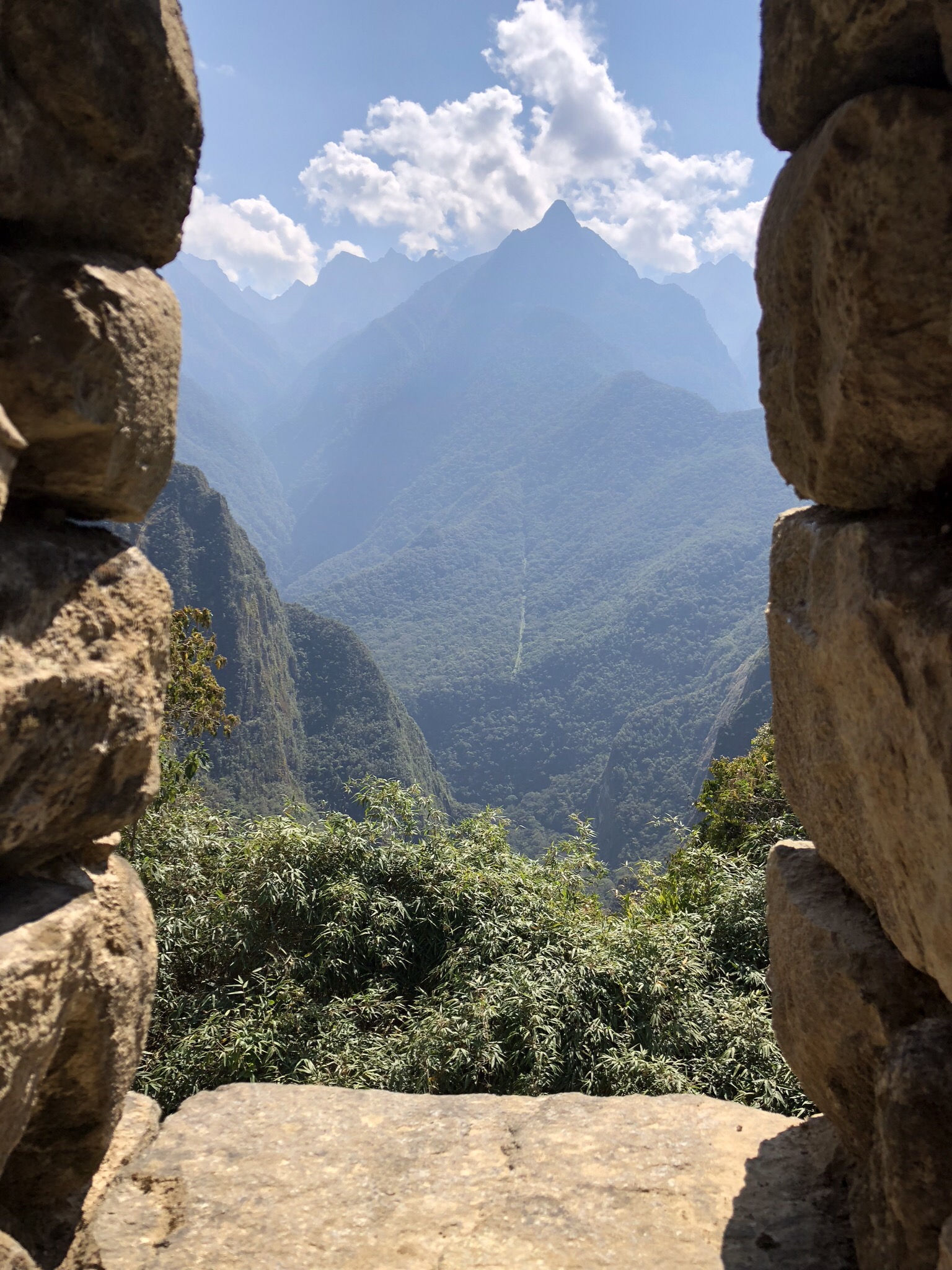 So you see the sights with LOTS of other people. And you need to be prepared for that. That’s the down side. But the actual site is incredible so you grin and bear it.

What struck me was Machu Picchu’s strong spiritual feel, even with a steady stream of tourists going through. Although everyone is herded through the site in one direction and it is very difficult to go back to a section after you’ve passed through it, there are still nooks and crannies where you can sit and soak up the atmosphere. Zoë and I found a few places like this after Lourdes finished our official tour and we enjoyed just looking out, imagining what life must have been like there and appreciating the spectacular scenery.

It was an incredible day and I feel grateful that I could visit this special place on earth. Knowing that I was helping Zoë make a dream come true made it even better. She was the perfect person to be with me to see Machu Picchu. 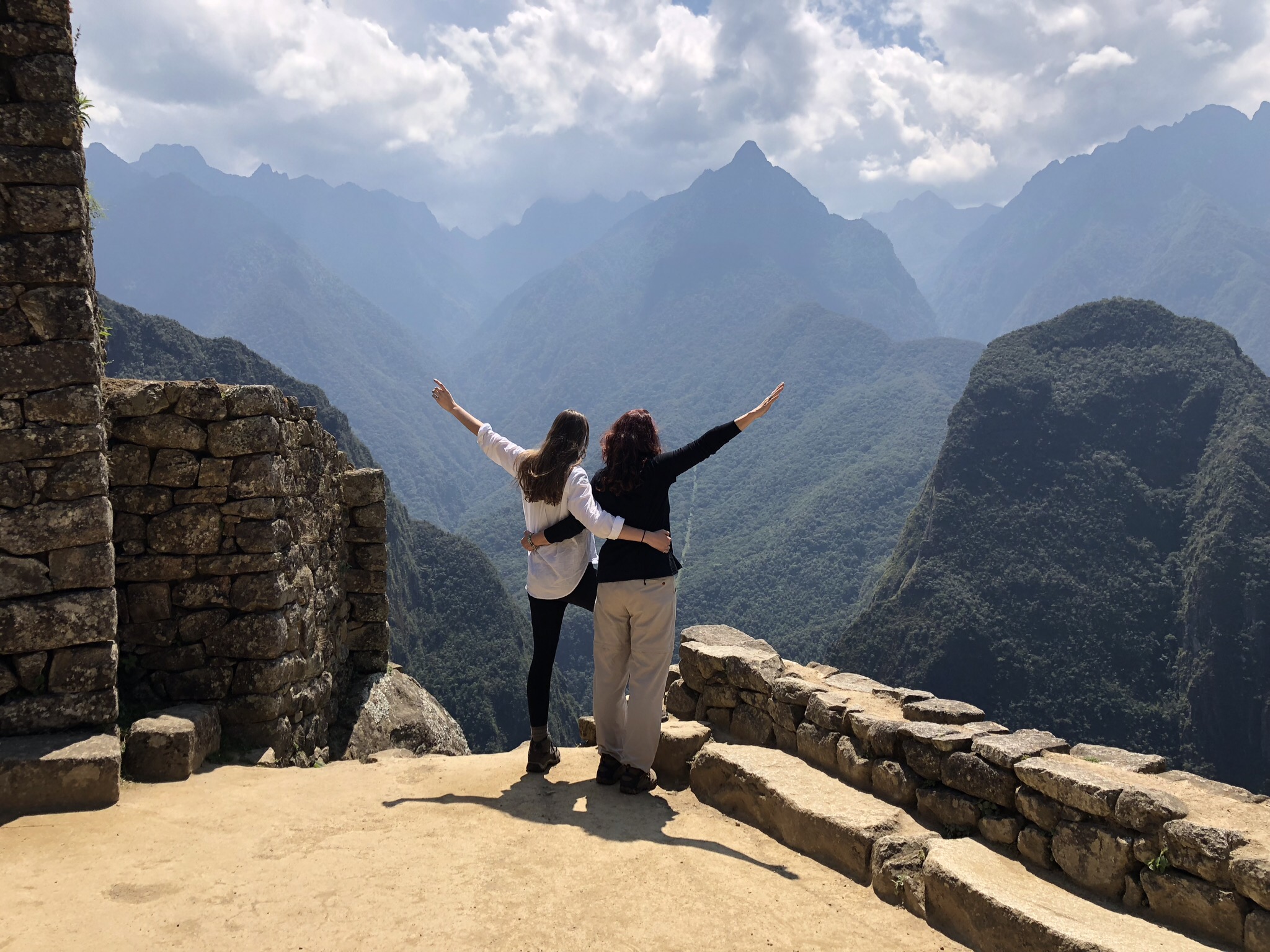 5 thoughts on “A day at Machu Picchu”