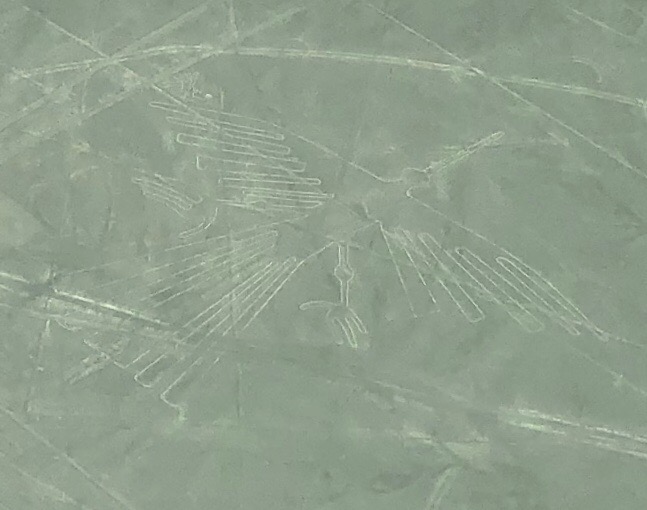 The Nasca Lines, dated between 500BC and 500CE, are a series of giant geoglyphs in the Peruvian Nasca desert. Modern scientists started studying them in the 1940s and a German mathematician, Maria Richer is acknowledged as the woman who devoted her life to the preservation and study of these ancient lines. Because of Maria’s work, UNESCO designated the area a World Heritage Site in 1994.

But I’ve wanted to visit them since I was nine years old. My grandmother had a bookcase that held every Nancy Drew mystery and I spent years reading my way through the whole collection. I read the The Clue in the Crossword Cipher where Nancy and her two best friends were invited to Peru to solve a mystery and visit the Nasca Lines. And once I read about them, I was determined that one day I would go there.

We arrived in Nasca yesterday (Wednesday) just after 11am and were picked up at the bus station by staff from AeroParacas. We left our bags at their office in Nasca city and then were driven to the Maria Richer aerodrome on the outskirts of the city. The aerodrome services a number of airlines that solely do 30 minute tourist flights over the Lines. 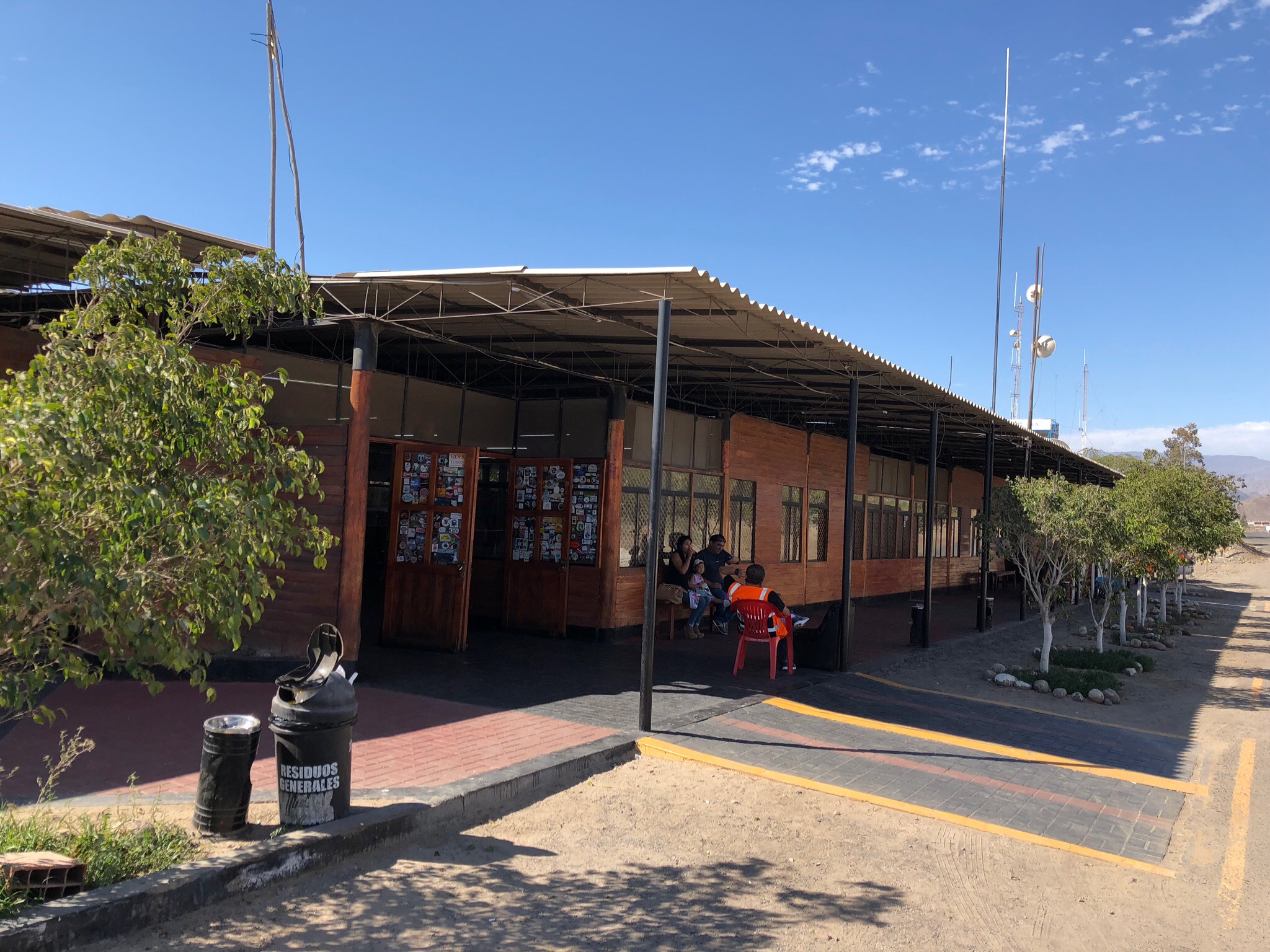 We were weighed, paid our departure tax of 20sol each, had our passports examined repeatedly and then waited our turn. 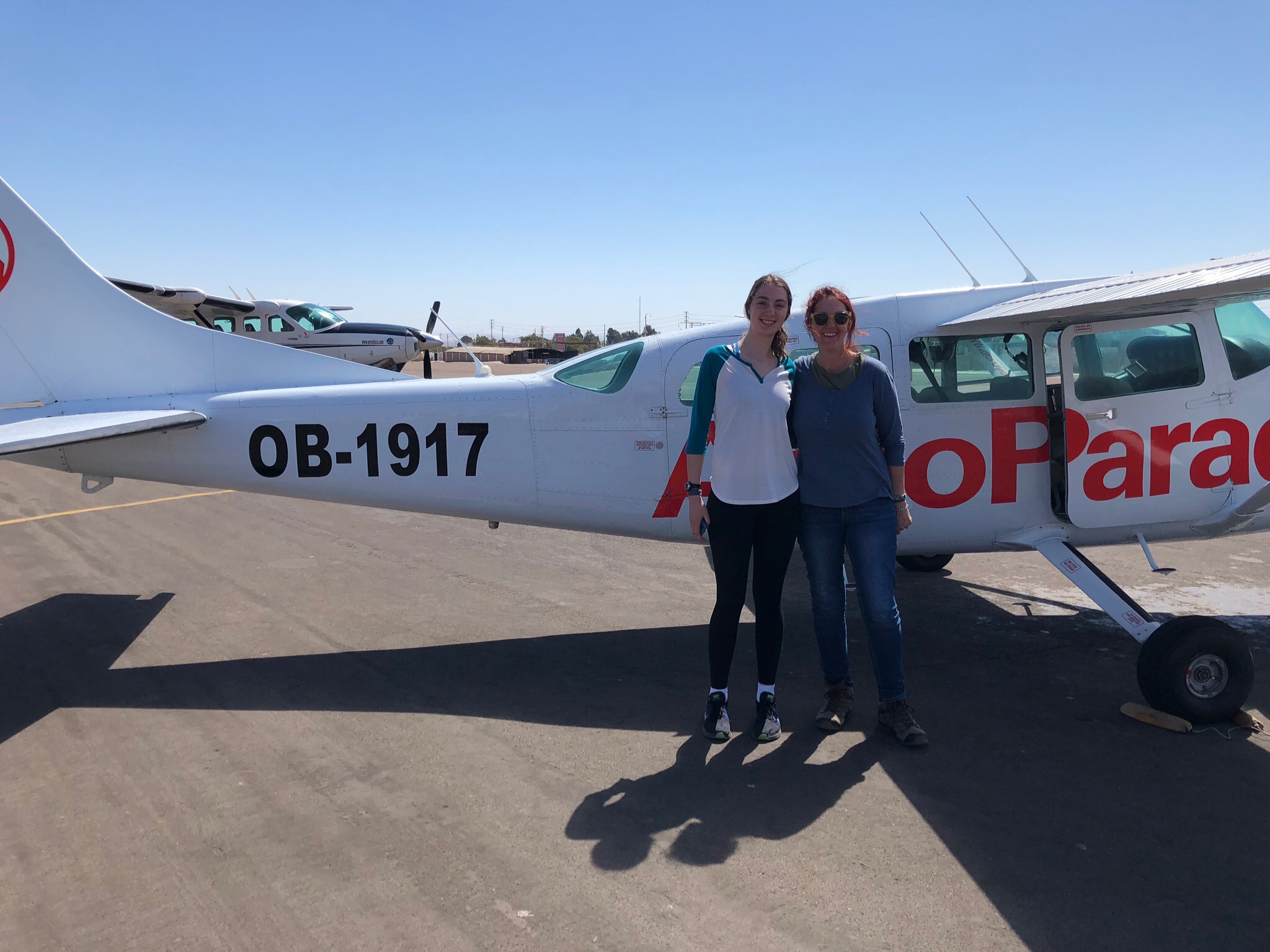 Our pilot did our safety briefing and then we got underway. 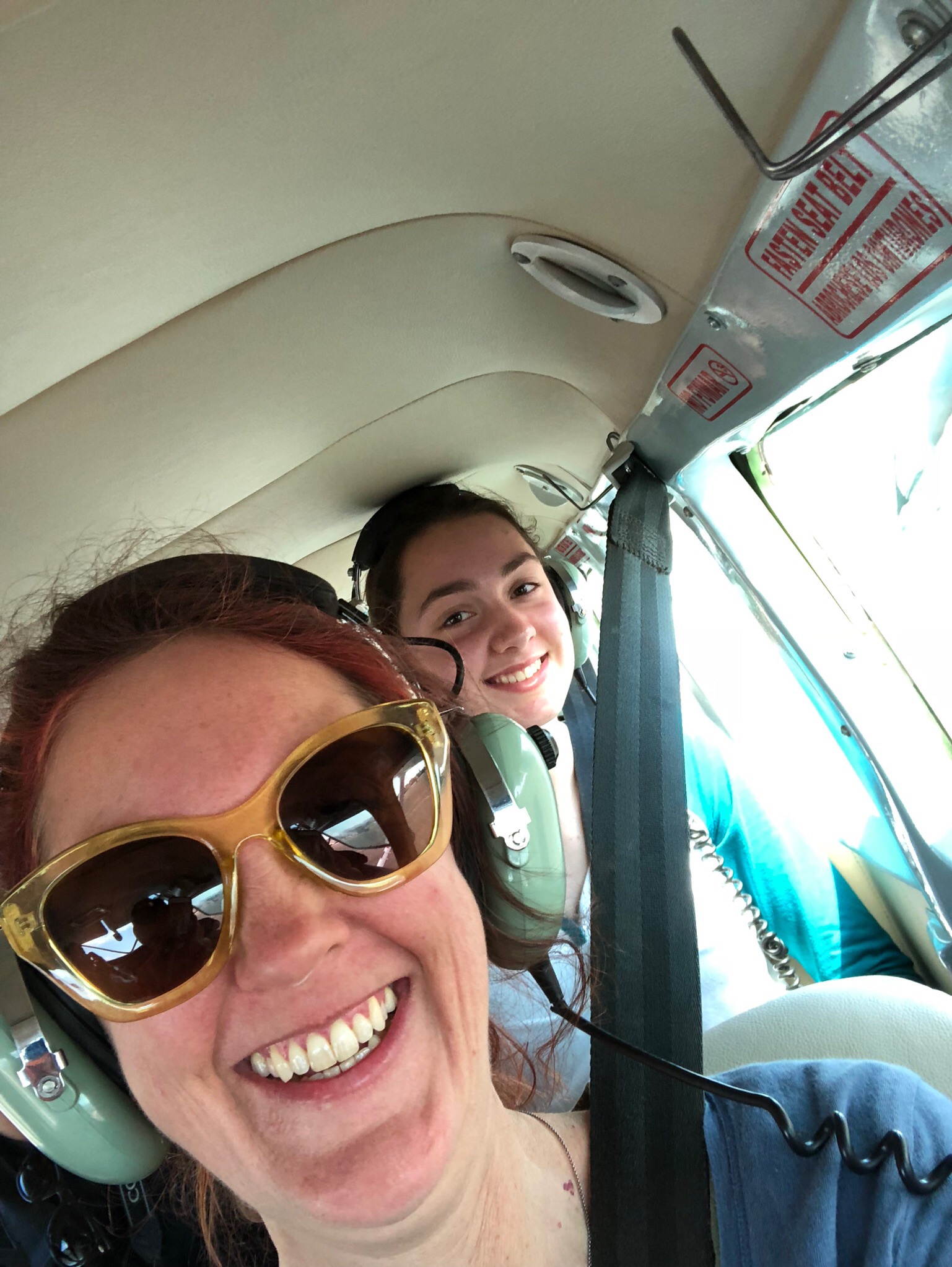 The Lines cover the desert at Nasca and there are a number of theories as to why they exist. They were created pre-Inca time. Some researchers think they are religious and ceremonial sites for the ancient Nascan people. Others think they are aligned to the solstices or to celestial objects. No one knows for sure. It’s a mystery.

They do know how they were formed. The red pebbles of the desert were moved to expose the white rock underneath. As Nasca gets one hour of rain per year on average (it’s one of the driest places on earth), the lines, which are only 10 to 30cm deep are protected from the elements. Even the wind somehow ‘cleans’ the lines and keeps them exposed. 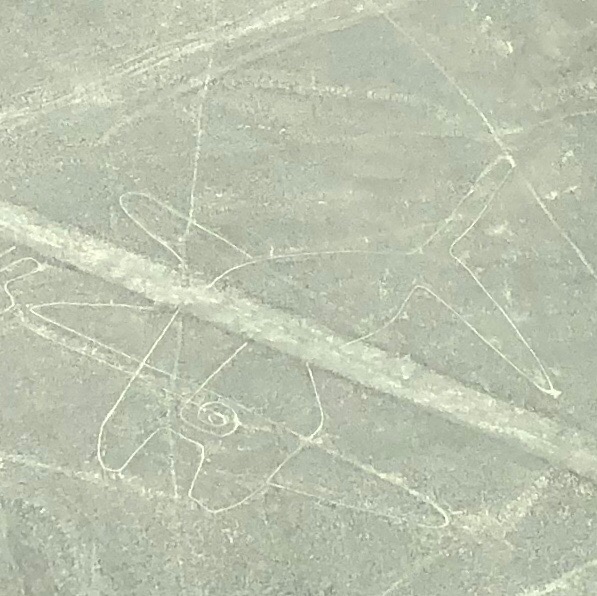 The lines were only discovered in the 1920s when the first military flights flew overhead. As the patterns are huge, they can’t be seen from the ground level. In fact, the PanAmerican Highway cuts across a few of the lines because the engineers didn’t know they were there when the road was built. 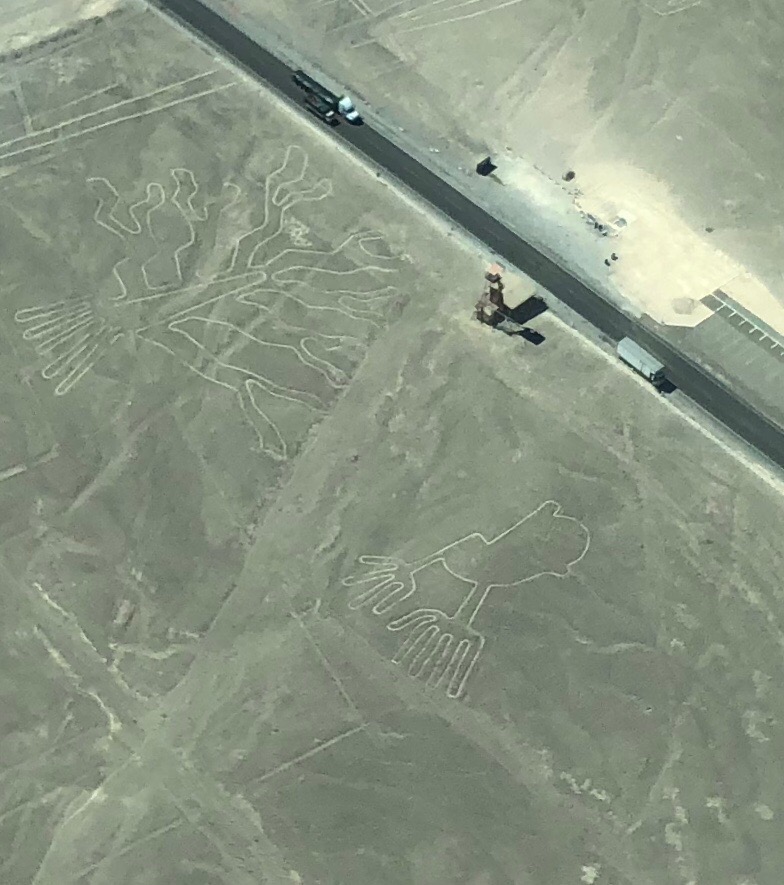 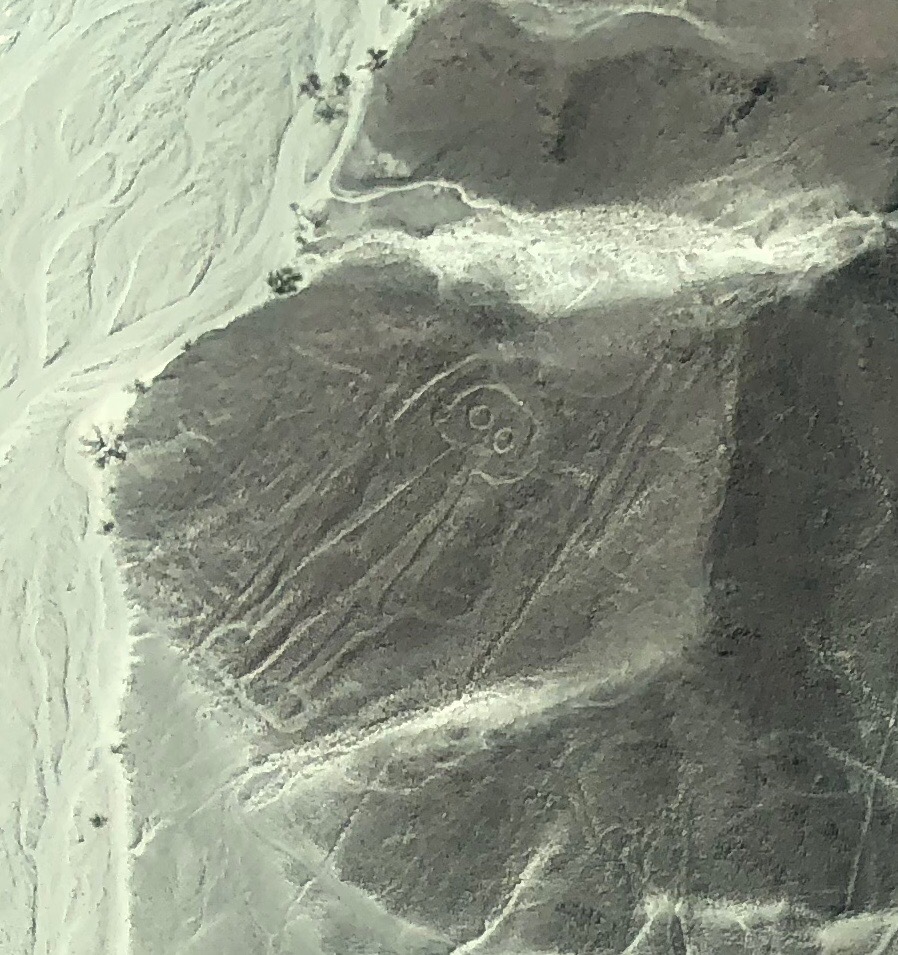 From the air you get a great view. The pilot of the plane banked steeply right and then left over each geoglyph so everyone was able to see it clearly. He used the wing tips to point to each figure. Some are really huge. The alcatraz (or pelican) is the largest at 935m long (285ft). The monkey is 100m long (330 ft). And the spider is considered small at 46m long (150ft). 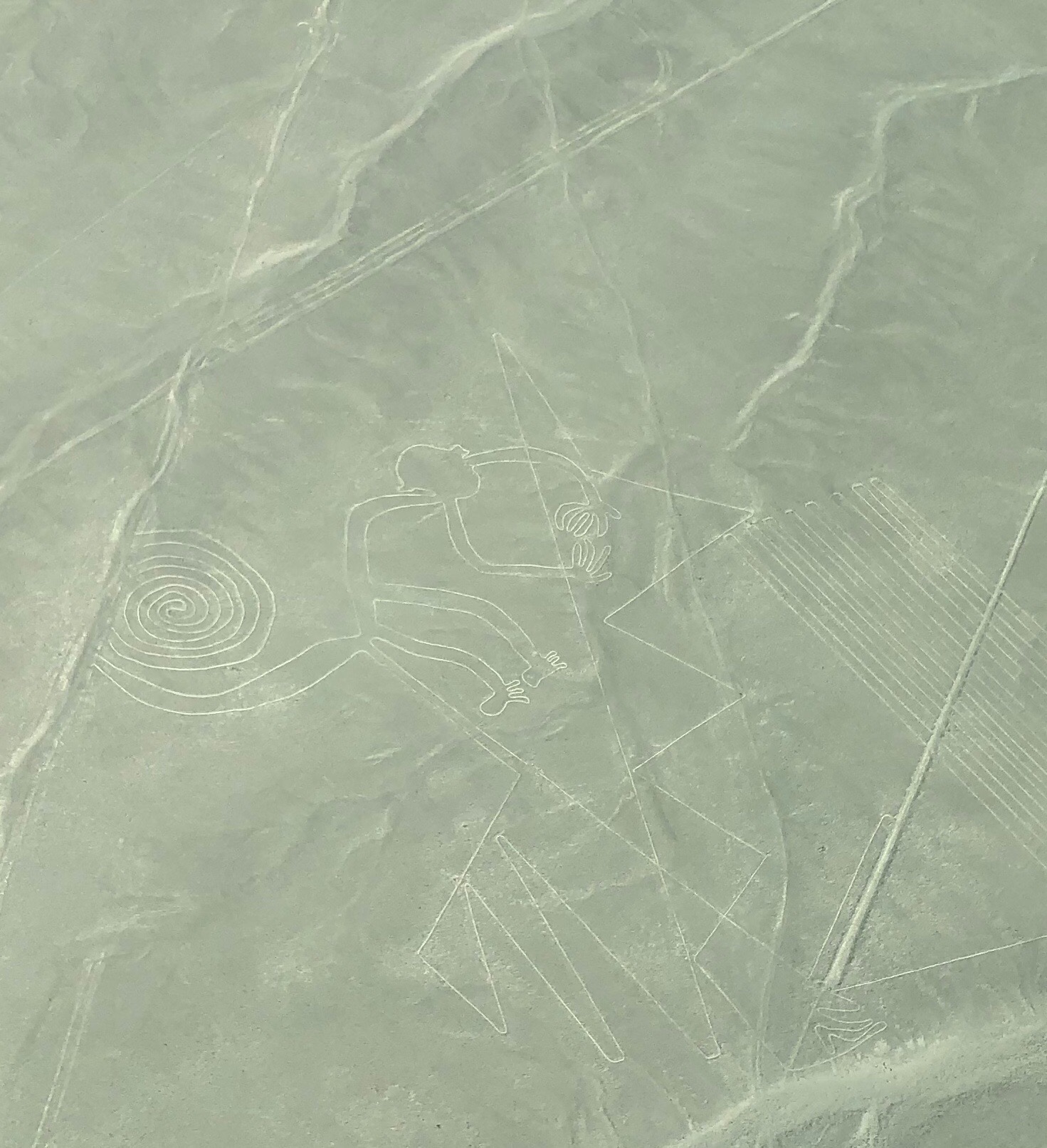 What amazed me was the number of figures. We had been told we would see the main 12: whale, monkey, astronaut, dog, trapezoids, hands, tree, condor, hummingbird, dog, spider, parrot and alcatraz but really there are thousands of lines, some on top of others. The 12 listed above are the most fun to recognise, but there are so many more. 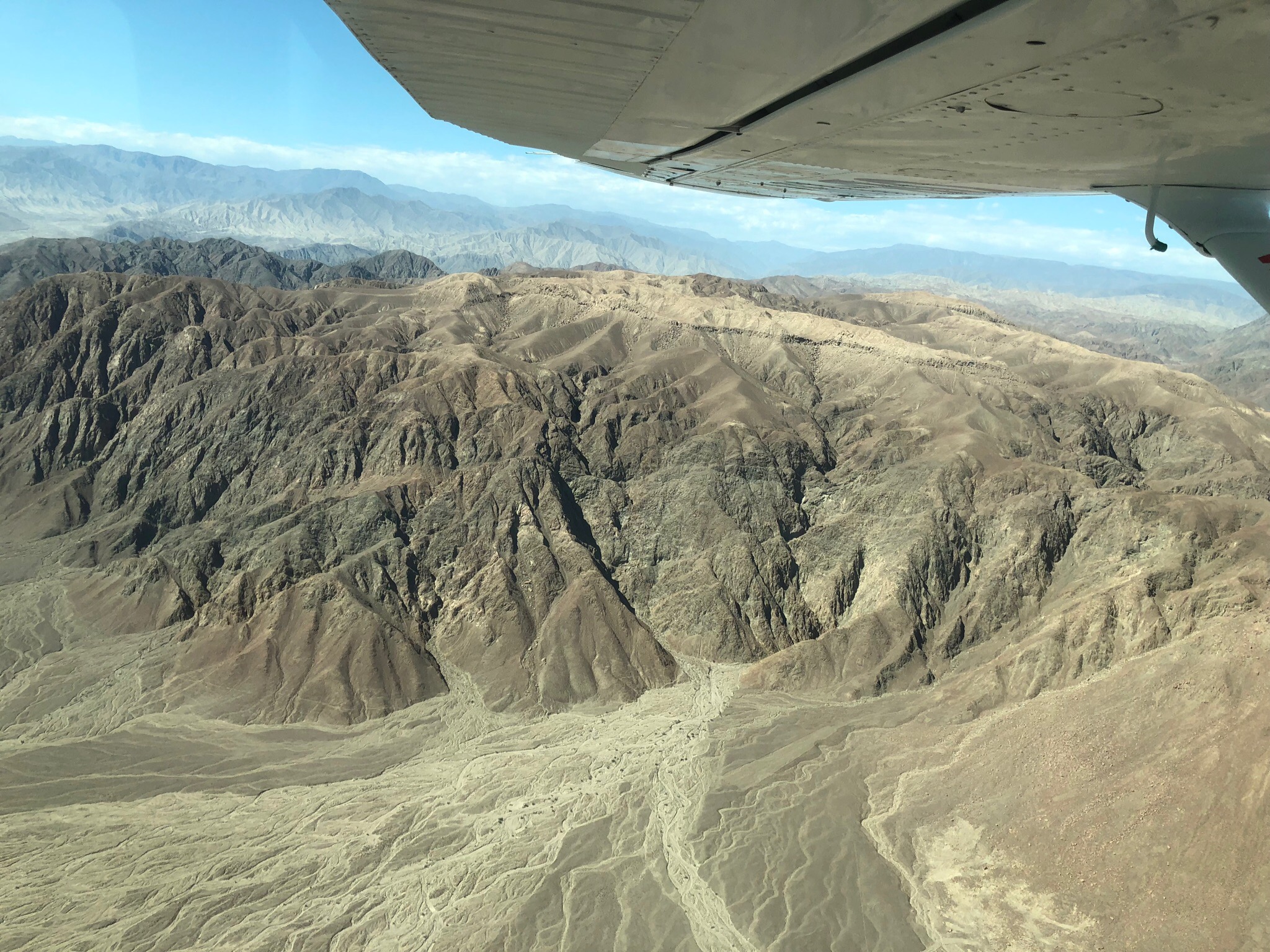 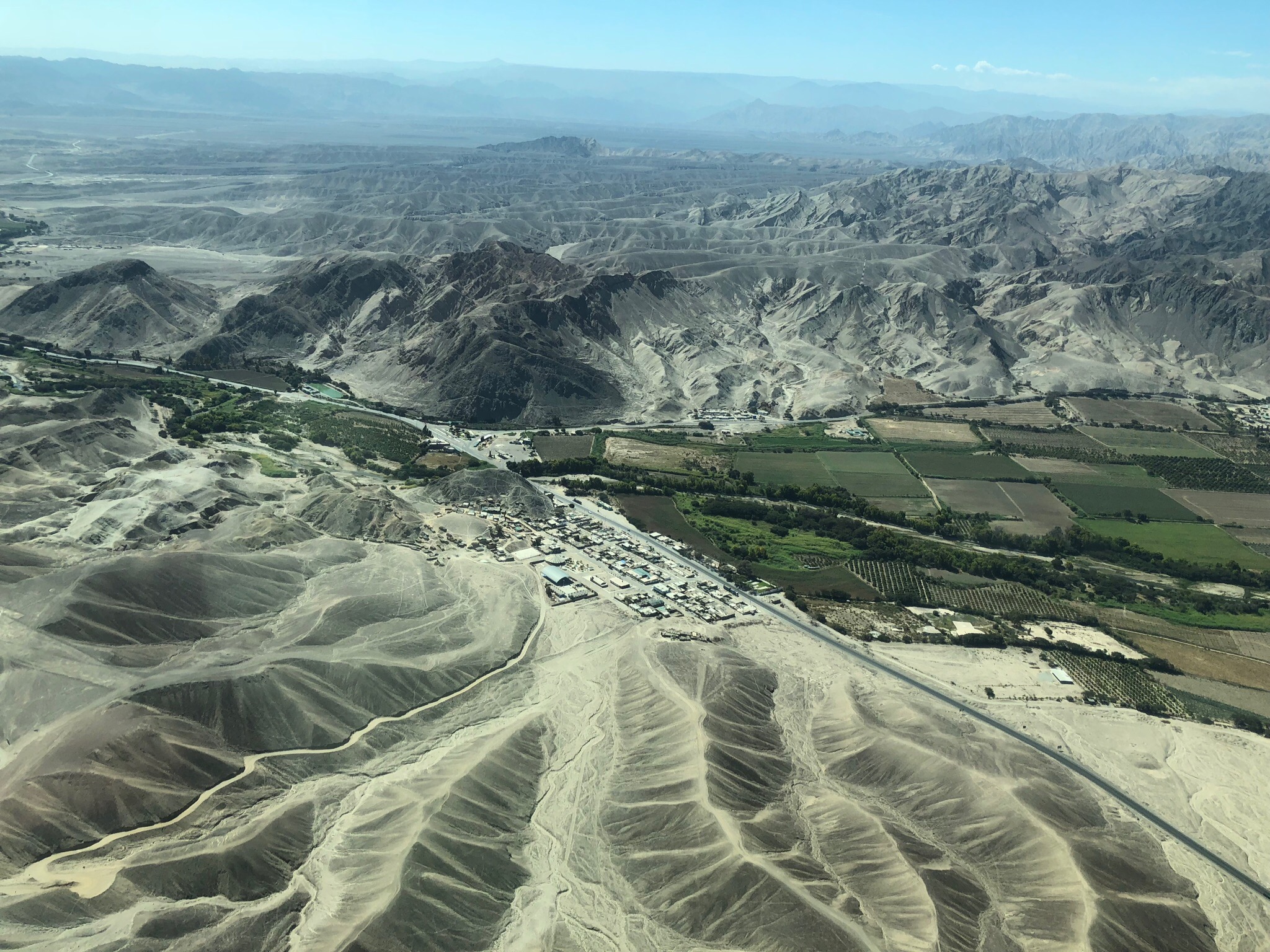 At the conclusion of the flight, we were given a certificate (to say we had survived!) and driven back to the city. We picked up our bags and found a small hotel across the street that would let us pay for a room for 10 hours. We were able to leave our stuff there, go have lunch and then we had a rest. It was a great way to finish the afternoon since we hadn’t had breakfast or lunch before the flight to minimise the chance of being sick.

We had a late nap (until 7pm!) and decided to go out for dinner. On our way out of the hotel, the lady who managed the hotel encouraged us to visit the planetarium down the street. We put our dinner plans on hold and stopped by the planetarium. We were so glad we did! It was brilliant. It’s a small building with various Nascan paintings on the outside. The evening’s show about the stars and the Nasca Lines was led by Marco, an incredibly passionate and knowledgeable astronomer from Nasca. Marco enthused everyone about the Lines and their possible meanings. And explained it all in seven or more languages! 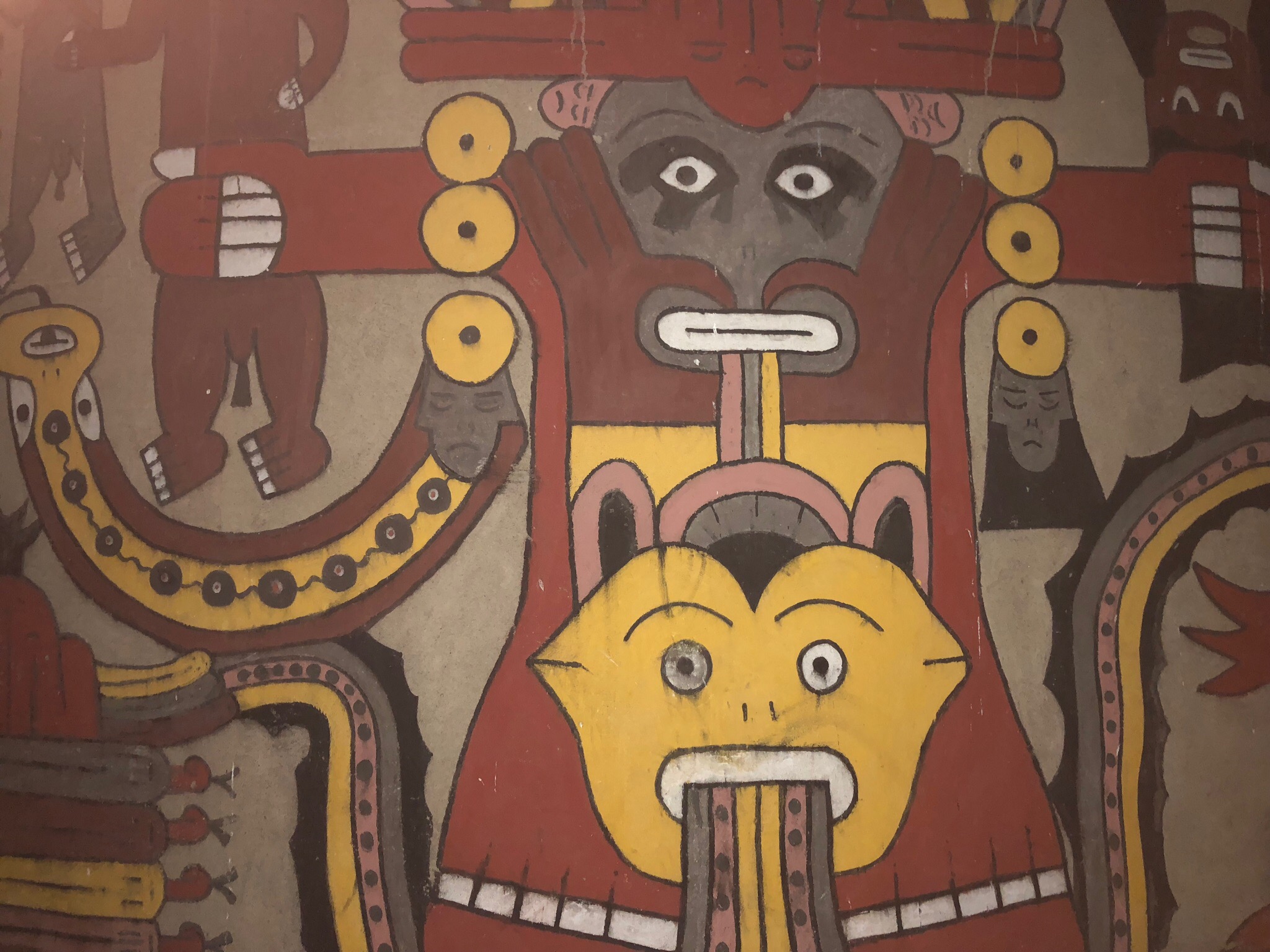 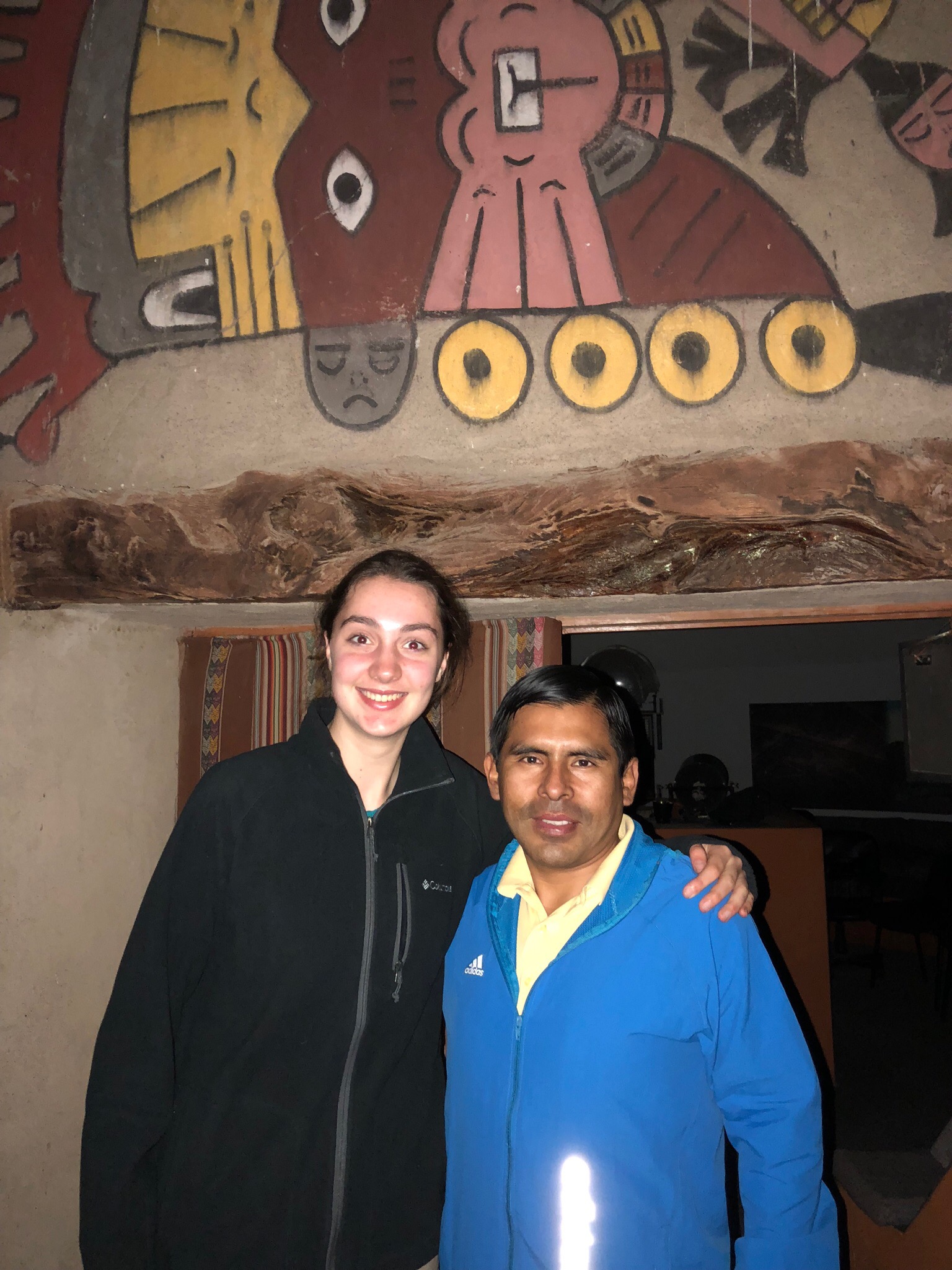 At the end of the show inside the planetarium, I was able to indulge my inner astro geek as Marco had a large telescope set up and we were able to look at Jupiter and four of it’s moons. It was a great way to finish our day in Nasca.

At midnight we caught our next bus. An 11 hour overnight journey to Arequipa.

One thought on “Nasca – A Mystery in the Desert”